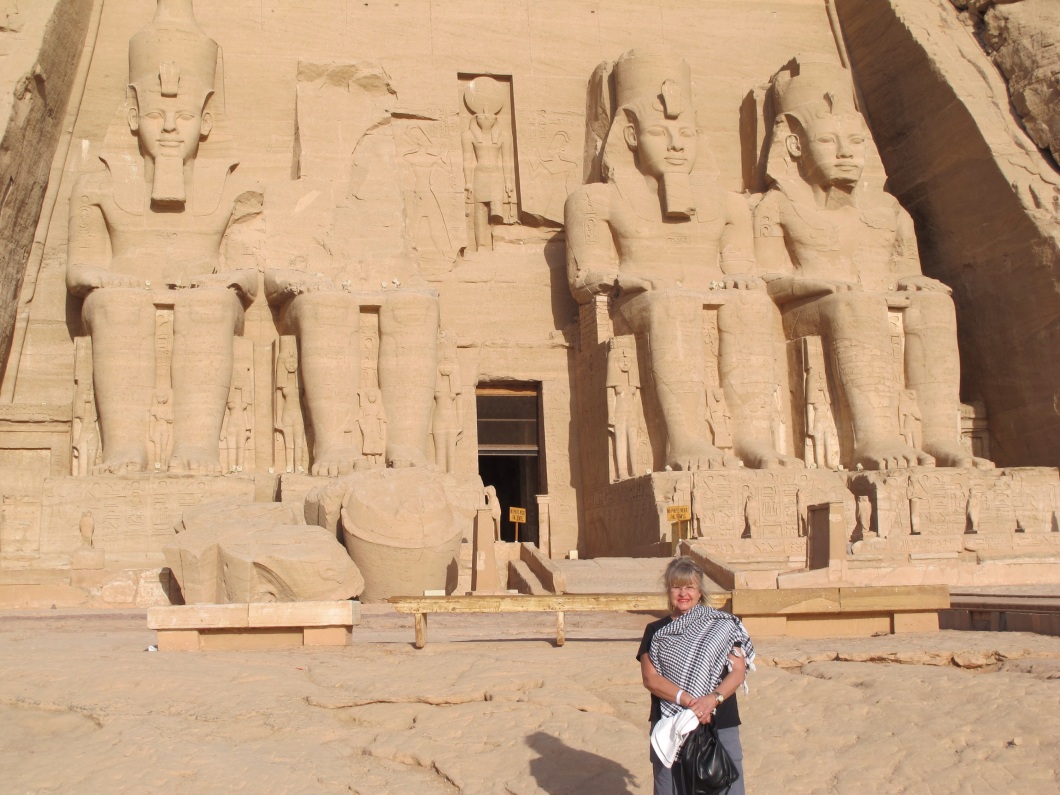 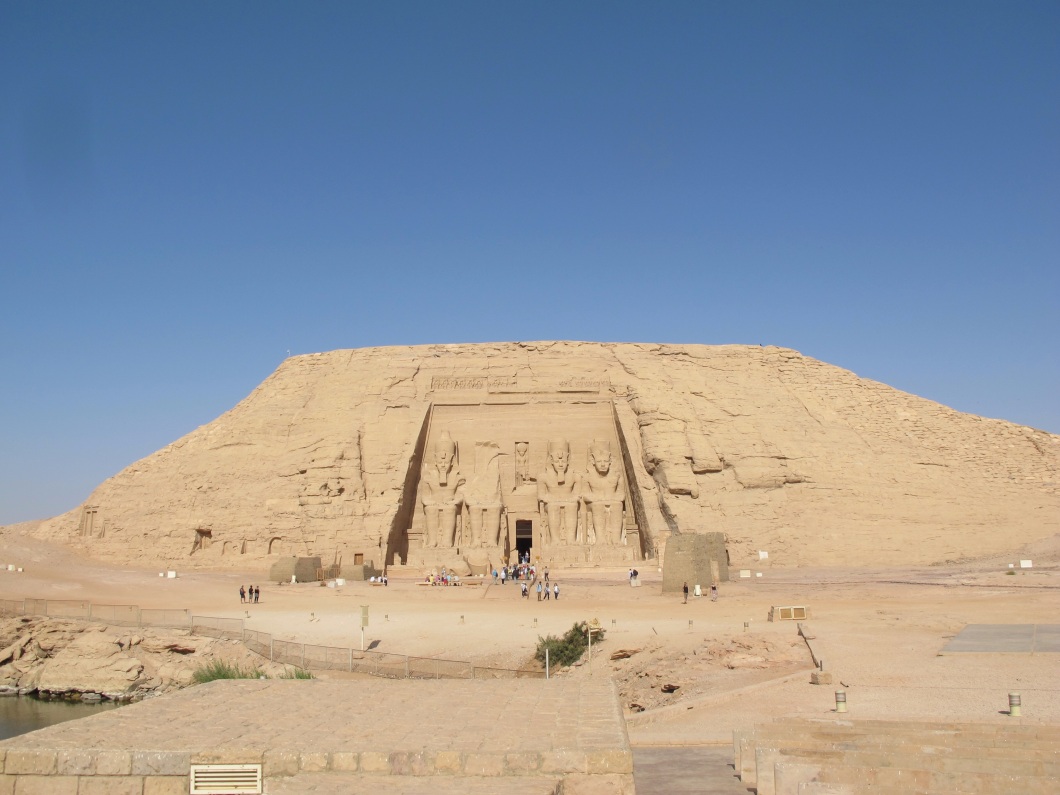 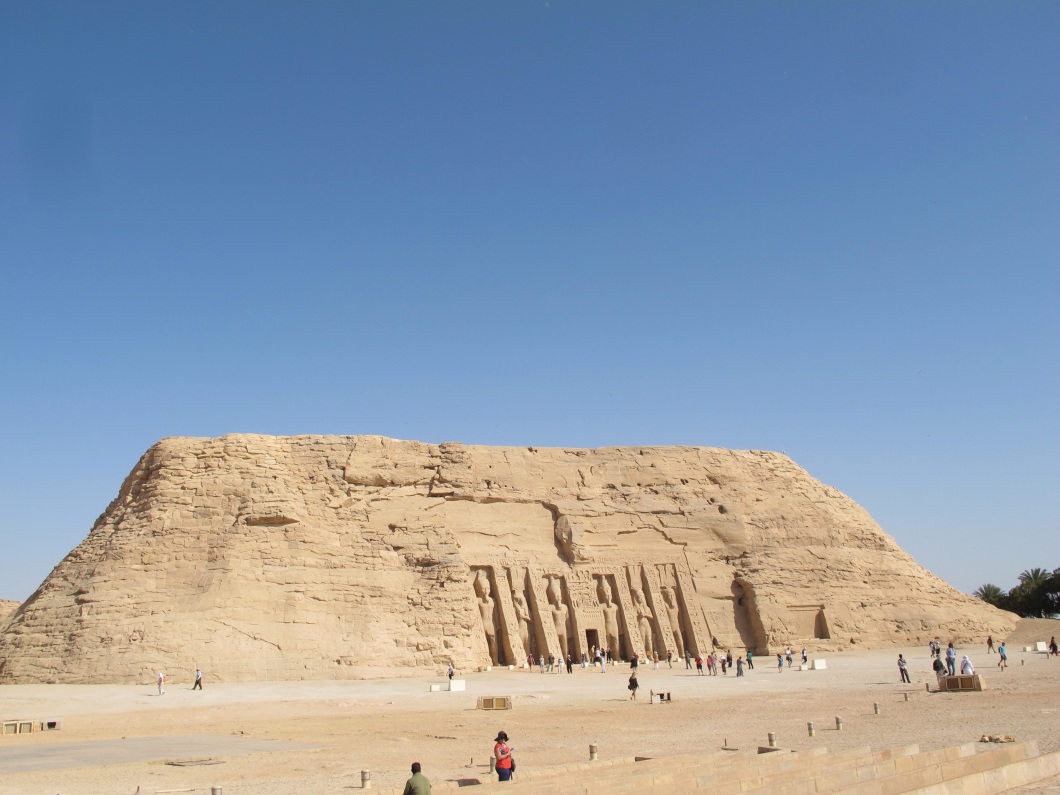 This is Abu Simbel … by far my favourite Temple in Egypt.  To be continued tomorrow night …

This tour was an extra that i decided to go on once I started really enjoying the ancient Egyptian history.

Seven of us opted for the tour … John didn’t come … he had had enough of old rocks!  So we had to get up at 2.30 am, have a cup of tea, hop on our 12 seater bus with our guide and then go and marshall with 22 other buses that were driving the three hours south to Abu Simbel which is right near a village called Nubia down near the Sudanese border

I guess now is a good time to talk about whether we felt safe in Egypt or not.  At this point in the game, the answer was no and it only got worse as Egypt went to war with Yemen while we were there.  I was pretty nervous about the fact that we actually had to drive in convoy  with guards.  It could only be for one reason … security … so that we didn’t get hijacked or blown up.  There was IS to worry about and the Sudanese as well

So, I grabbed three seats, put my head down and slept through most of the drive.  However, we did have to stop loads of times to go through both police and military road blocks … which is pretty much the norm in Egypt.  From Hurghada to Luxor we went through lots of road blocks on the way to the Nile.

Eventually arrived at Abu Simbel and it was AMAZING!  The two temples were built by the Pharaohs (which was the name our guide used for us … whenever we were out touring and he needed us to regroup he would call out “Pharaohs”.

This info is copied from wikipedia …

The Abu Simbel temples are two massive rock temples in Abu Simbel (أبو سمبل in Arabic), a small village in Nubia, southern Egypt, near the border with Sudan. They are situated on the western bank of Lake Nasser, about 230 km southwest of Aswan (about 300 km by road). The complex is part of the UNESCO World Heritage Site known as the “Nubian Monuments,”[1] which run from Abu Simbel downriver to Philae (near Aswan). The twin temples were originally carved out of the mountainside during the reign of Pharaoh Ramesses II in the 13th century BC, as a lasting monument to himself and his queen Nefertari, to commemorate his victory at the Battle of Kadesh.

The complex was relocated in its entirety in 1968, on an artificial hill made from a domed structure, high above the Aswan High Dam reservoir. The relocation of the temples was necessary to avoid their being submerged during the creation of Lake Nasser, the massive artificial water reservoir formed after the building of the Aswan High Dam on the Nile River.

In 1959, an international donations campaign to save the monuments of Nubia began: the southernmost relics of this ancient human civilization were under threat from the rising waters of the Nile that were about to result from the construction of the Aswan High Dam.

The salvage of the Abu Simbel temples began in 1964 by a multinational team of archeologists, engineers and skilled heavy equipment operators working together under the UNESCO banner; it cost some $40 million at the time. Between 1964 and 1968, the entire site was carefully cut into large blocks (up to 30 tons, averaging 20 tons), dismantled, lifted and reassembled in a new location 65 meters higher and 200 meters back from the river, in one of the greatest challenges of archaeological engineering in history.[4] Some structures were even saved from under the waters of Lake Nasser. Today, a few hundred tourists visit the temples daily. Guarded convoys of buses and cars depart twice a day from Aswan, the nearest city. Many visitors also arrive by plane, at an airfield that was specially constructed for the temple complex.

The complex consists of two temples. The larger one is dedicated to Ra-Harakhty, Ptah and Amun, Egypt’s three state deities of the time, and features four large statues of Ramesses II in the facade. The smaller temple is dedicated to the goddess Hathor, personified by Nefertari, Ramesses’s most beloved of his many wives.[5] The temple is now open to the public.

… so I know that was cheating … but at least I acknowledged my source.

It was truly magnificent to be there and our driver had managed to hot foot it and overtake all of the other buses so we were the first ones there and had the site to ourselves for the first 10 minutes … consequently the photo of me with no other tourists in the background.

Inside the main tomb it was 65 metres deep with side rooms.  There were huge sculptures inside as well and beautiful carvings all over the walls.  I was a good girl and followed the rules and didn’t take photos.  However, I am quite sure that that is just so that you have to buy books and postcards, rather than saving the monument.  In Egypt it is ALWAYS about the dollar.

I have forgotten a lot of things in my life but I am sure that I will never forget this visit.

After visiting the temples and the museum we had a nibble of our packed lunch, got harassed by all of the men selling things, hopped on the bus and drove back again in convoy.  Luckily once again I slept.