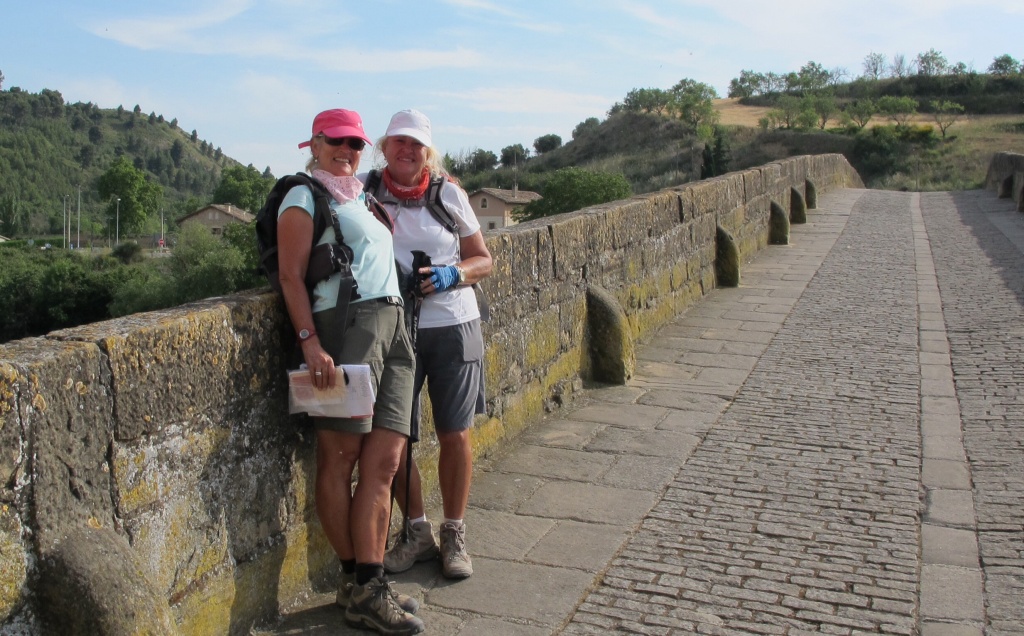 Well here we are on the bridge at Punta la Reina, Spain.  970 km from where we started in Arles, France.  We finished very late (at about 6.30 pm) on Thursday 19 June.  This day we walked 31 km.  We thought that it was going to be a gentle downhill but old St Jacque had the last laugh.  For the first 20 km of the day he had us going up and down the side of a mountain … traversing to our final destination … not what we expected at all.

We were lucky enough to stop for lunch in a town.  On the outskirts there were two cherry trees but I couldn’t reach the branches to pick them so just took photos.  It was laden.  MR being the country girl that she is didn’t give up so easily.  She hooked her pole into the branch and dragged it towards us.  We grabbed handfuls and stowed them in a plastic bag.  Within five minutes we had a kilo and decided that that was enough as we had to carry them.  They were delicious!

We found a cafe for lunch … internet … a bonus!  The three French pilgrims I had dinner with the night before were there.  They were shocked by the terrain as well.  We ran into them several times during this last day and they looked more exhausted each time.  I think that they had been on a two week walk and this was their last day as well.

We also managed to watch the crowning of the new Spanish King … that was fun!  However, we didn’t dilly dally as we had a long way to go! 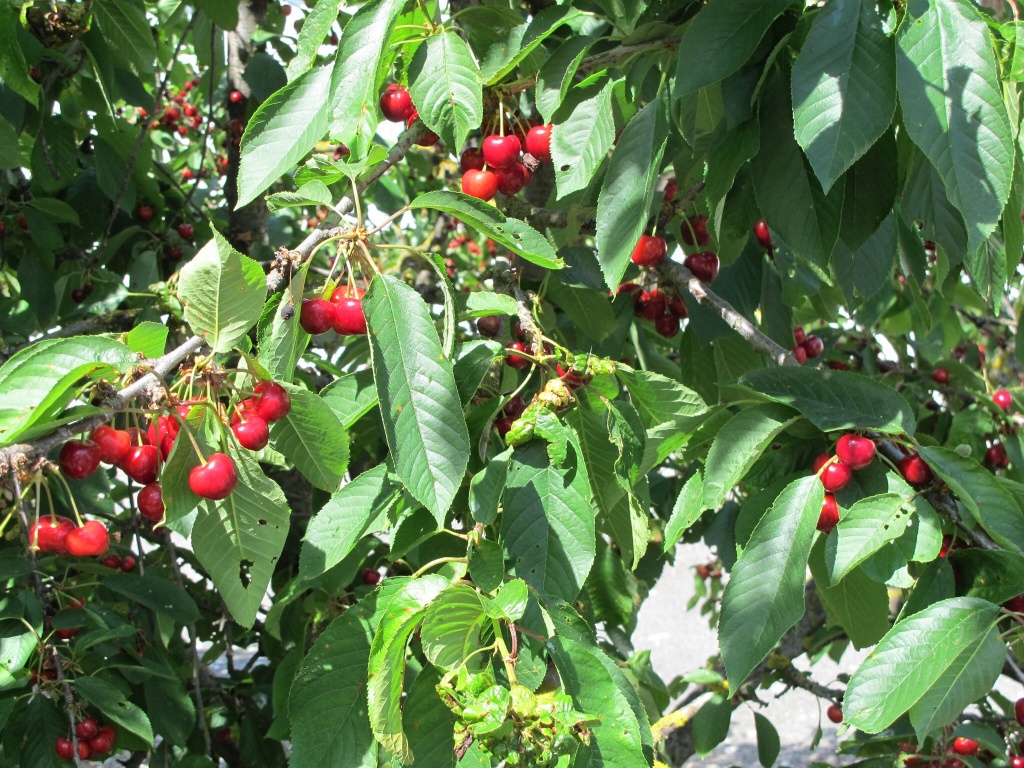 Once again Bruce managed to position himself right on the camino so that we could stop later on in the afternoon and have a cup of tea and a little rest.  This was such a wonderful treat along the way.  He had even managed to find a cherry tree to park next to.

We finally arrived into Punta la Reina at about 6.30 pm and had time to duck into the church.  Bruce met us there and pointed us in the direction of the tourist office which closed at 7 pm.  So we got our final stamp.

Punta la Reina is where our camino (the Arles Route or Tostana Route) meets the most well known camino … Camino France.  I think it is called that because it officially starts at the base of the Pyrenees in France.  This is the one that I did seven years ago.

I was gobsmacked when we reached the town.  There were hundreds and hundreds of pilgrims.  All shapes and sizes, ages, nationalities … although I detected a hell of a lot of American accents!  I think you can put that down to the Martin Sheen move The Way.  To be honest it horrified me!   There were just too many people and I don’t think that I could stand doing that route again.

MR and Bruce had provided lunch for me every day of the walk plus several evening meals, plus transporting my bag, plus looking after me every single day ….. plus plus plus.  The deal was that I take them out for dinner on the last night to thank them.  I was hoping for somewhere really special.  Unfortunately things didn’t pan out that way.  My hotel was a km or two out of town and there was nowhere suitable to park the van near town.  So they parked in the hotel car park and we had the worst meal of the trip!  It was a smorgasbord! Yuk!  Add a lot of American tourists doing one week guided walks of the camino and it was a nightmare!!!!!!!

Our camino might have been lonely at times but this was awful.  I think that the Le Puy Route that I started last year had the right amount of pilgrims.  Enough to keep you entertained but not too many.  Like it was on the Camino France Route 7 years ago.

MR and Bruce were keen to head off to meet up with friends in France and I had booked a flight from Pamplona to Rome on Saturday 21 June to meet up with John.  So the next morning we headed to Pamplona … only 25 km … and they dropped me at a hotel on the outskirts of town near the airport for a couple of nights.  I don’t mind telling you that I was absolutely elated about finishing this walk but at the same time absolutely physically exhausted!  I just wanted a day to myself to try and pull it together before meeting up with John.

I managed to find somewhere to get a full body massage which was great … but it didn’t include my feet!  Bugger!!!!!  My feet were killing me!  I also managed a spot of shopping, although by this stage I was starting to hobble.  My left foot had given up the ghost.

On the Saturday I had time to head into the centre of Pamplona and do a spot more shopping before heading to the airport for my flight to Rome, via Madrid. 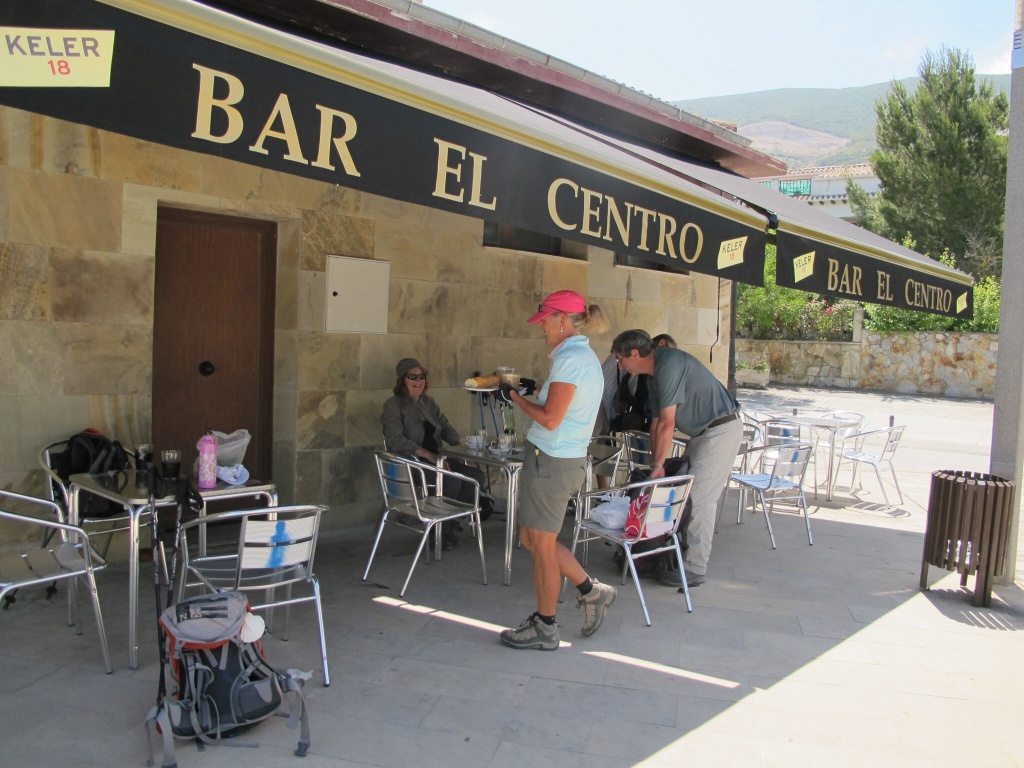 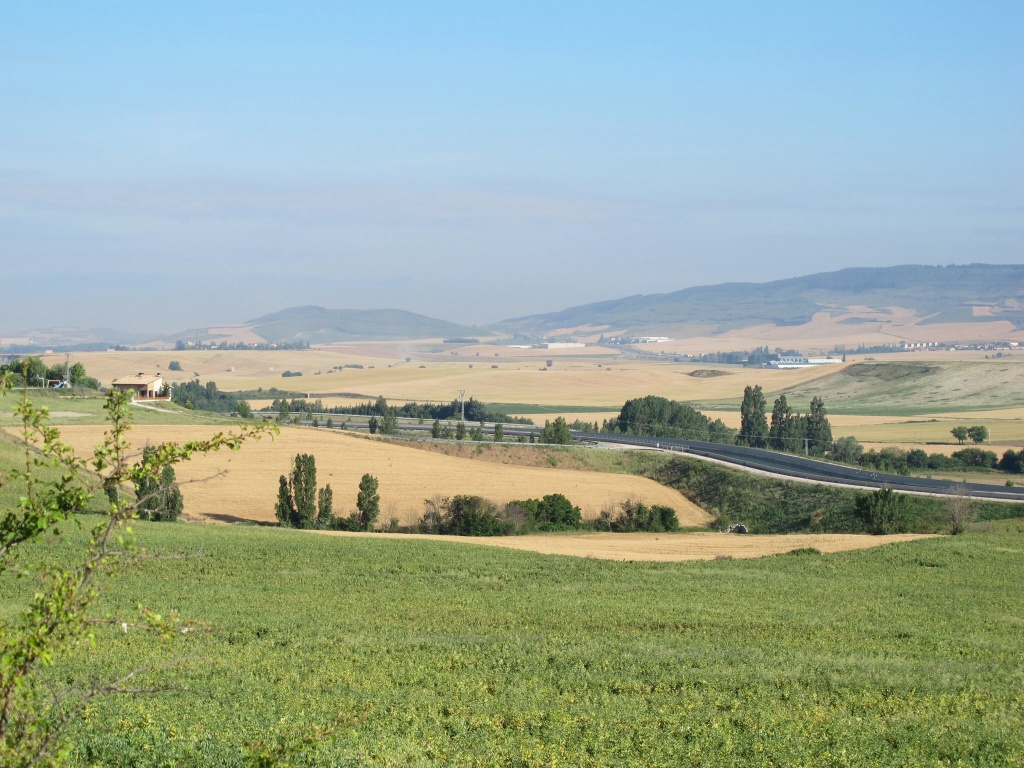 More on the camino in the next blog!