This was another one of those tough days for me.  We walked out with Gunter and Ute … a German couple that we had met along the way.  We walked with them for a while but they dropped off as Ute is really little with a full pack and couldn’t keep up.  I realised pretty quickly that I was in exhaustion mode … again!  So we stopped for an early morning tea.  I had learnt that I do get over this but it takes me a couple of tough hours to get through it.

It was supposed to be flat … but good old St Jacque did it to us again … there can be the straightest valley and he has to have you walking up and down the side of a hill/mountain!  From the top of a particular hill we saw Bruce pull into a hotel down the valley, so we phoned him and said wait there we will have lunch with you.

Unfortunately we were way too early for lunch, but had a tea/coffee and then walked on to the next town where we had organised to meet Bruce to have lunch in the van.  He is a legend!  A serious sweetheart!  This was a very special way to do a camino I can tell you.  He can’t always be near us and we don’t always need him during the day, but as I said today was a “I’m buggered!” day.

The town was Castiello de Jaca and apart from this great statue of St Jacque there was absolutely nothing happening in this town … especially on a Sunday. 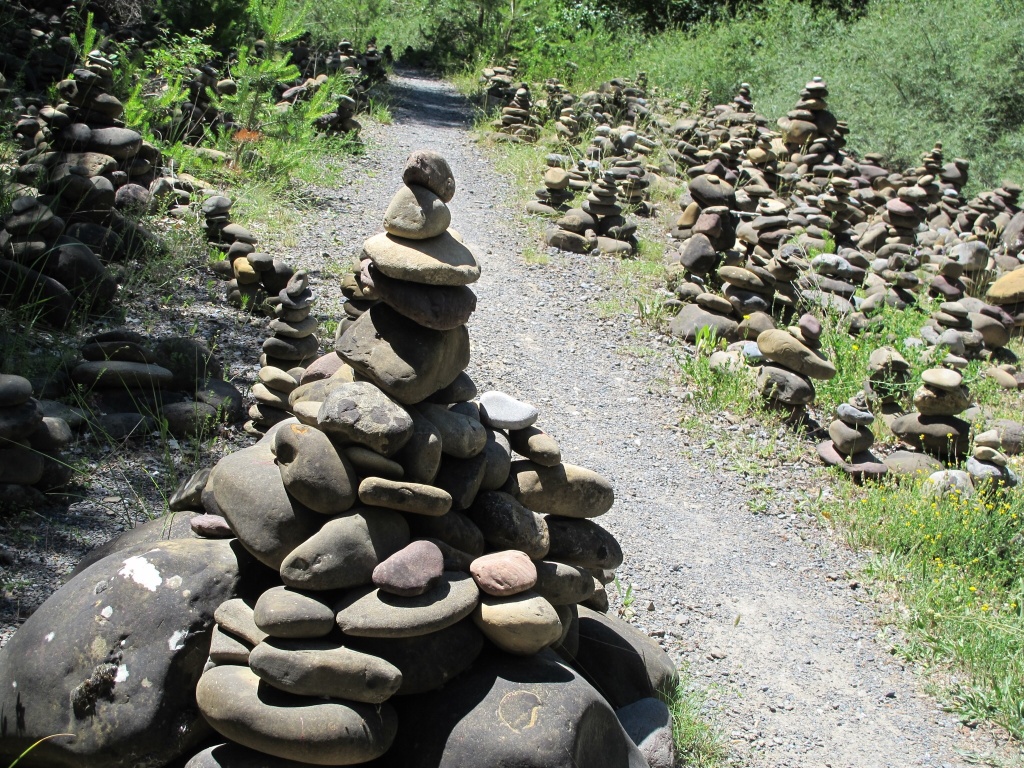 During the afternoon I picked up … thank goodness.  We walked along the Aragon River … more or less … in and out of strange paths, until we reached a three hundred metre stretch that had hundreds and hundreds of  these little piles of rocks that had been built by pilgrims.  Quite a surprise when you turn the corner and there they all are.  It also reminds you of how many people have trudged this path.

That night we crossed the bridge over the Aragon and met up with Bruce.  He said “this is not an exciting town, I can tell you.”  He found my hotel and had a bit of difficulty finding a park for the van.  It seemed like the whole town was at the local cafe attached to my hotel.  We had an ice-cream as a treat but couldn’t find a seat.  So we headed to the hotel to book me in.  The lady was very abrupt … add in the rather harsh Spanish language to the equation and I was feeling rather rattled, although you just have to laugh at situations like that.  She said that I didn’t have a reservation …. there were probably three of us staying in this hotel of 30 rooms … I couldn’t see that it would be a problem.  I knew that I had a reservation because I was with the previous receptionist when she phoned and booked it.  Nevermind.  Up to the room for a shower and washa the clothsa.

MR and Bruce fed me … again … that night!!!  A couple of Tinto Veranos, a great meal and bed.