More from the camino

At L’isle de Noe I stayed at Edna Moody’s … she owns Moody Blues … a basic albergue. Edna was English and a truly lovely, lovely lady. I received a very warm welcome by her, as did MR and Bruce who escorted me inside. We had a cup of tea and cake … which was very kind of her.

This was the first real pilgrim only establishment that I have stayed in this trip. There was a German, a Frenchman, a Japanese girl and a Dutchman who was biking … and me of course. We were a pretty mottly crew I can tell you and the dinner conversation was hard work as the Frenchman and the girl had no English and I had no French, of course. However, a ridgy didge pilgrim night never killed anyone.

MR and Bruce were parked in the grounds of a chateau that had been bequeathed to the town. We never did get to the bottom of that, but it certainly was lovely with lovely grounds that had been turned into sporting fields from what I could gather.

Besides the 5 pilgrims Edna also had about 12 French people from a local association … something to do with horses … they had dinner and a meeting at Edna’s four times a year. I didn’t get to the bottom of what they actually did with the horses. Anyway, Edna was in a bit of a flap about feeding all of us. I helped her set the table and offered to help, but she managed … in between ducking out for a cigarette out on the back verandah with the pilgrims.

We had a very adequate meal of a salad entree, roast pork, beans and potatoes … and after we finished she found the endives in cheese sauce that she forgot to give us so we ate them as well. Followed by cheese. Copious amounts of wine included of course. I will also add that the next morning she cooked me eggs and fried tomato! That was very impressive … you only ever get bread and/or croissants in France usually. Edna charged us a very modest amount of 30 euro for a bed in a private room with a shower and basin but no toilet, dinner and breakfast. Cheapest so far.

On a slightly downside I think it would be fair to say that housekeeping wasn’t Edna’s strong point. You can read between the lines but basically the place was a riot! Fortunately I managed to ignore the dirt because she was such a sweetheart that you just wanted to hug her. There aren’t too many people like Edna in the world. 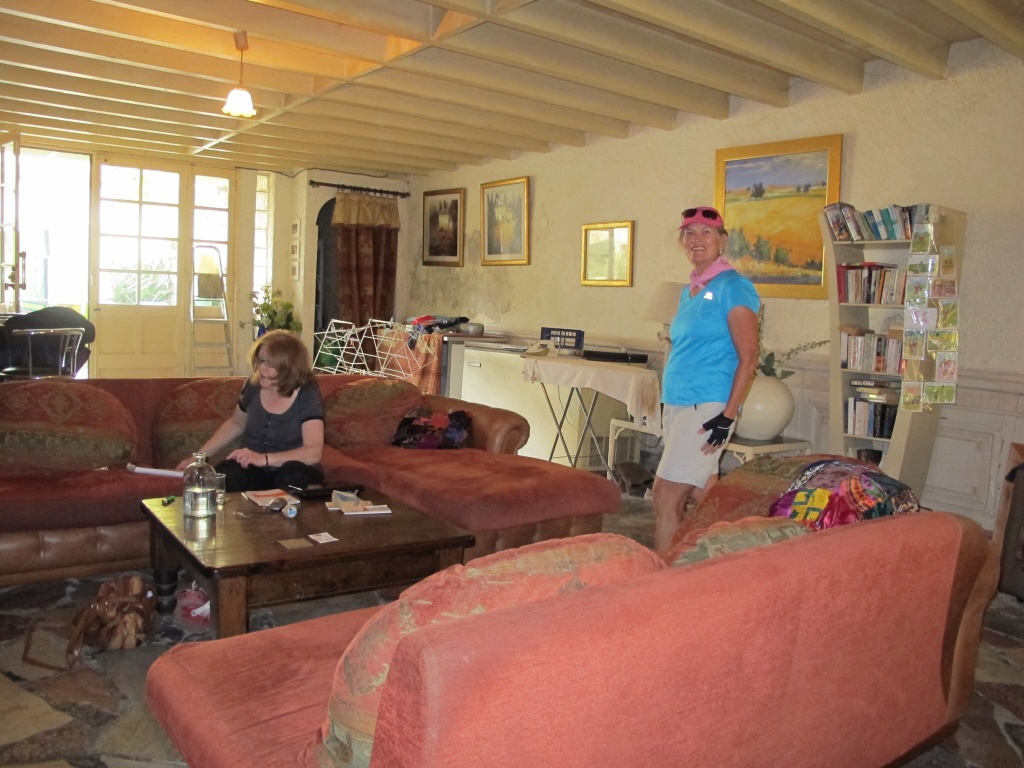 Her story went that she used to own a pub in England, got sick of it, put it on the market and it sold that day. The next day … having never been to France before she bought a house in France without seeing it!

One night an Italian pilgrim asked her if she had a bed for the night. Being kind she said yes. He wrote to the people that publish the accommodation book for pilgrims and added her. Now she has about 8 rooms and has pilgrims all of the time. She told me that she loves it and enjoys meeting and looking after pilgrims.

Ok … so the next morning Bruce drove us back to Barran (about 7 kms) for us to resume walking. On our way through L’isle de Noe we wanted a coffee and the Tabac was closed so we popped into Edna’s to see if we could pay her for a coffee. “I will make you coffee but you can’t pay” said Edna. So we had a coffee, used her internet, had a chat with her, took photos with her, managed to find a way to leave some money, and on we marched.

Not long after we left Edna we came across a procession of French people on carts led by beautiful horses. MR and I both recognised them from the village and I especially recognised them from the meeting at Edna’s. There were about 6 carts and they were being led by one man so that they all stayed together I guess. It was all very jolly. What I have to add at this point is that I have never known a country to have as many public holidays as France. Not only do they have lots of them but they bridge them … as in if the public holiday is a Thursday they take the Friday off as well. This is a common occurrence. You also have to add the fact that they have a siesta each day and seem to close their business any other day that they feel like it. Consequently nothing is ever open … or that is how it seems sometimes. So when we saw all of these people out riding on their carts on a Thursday that wasn’t a public holiday I seriously wondered why they weren’t at work! I actually don’t think that the French do work much!  What a great lifestyle though! 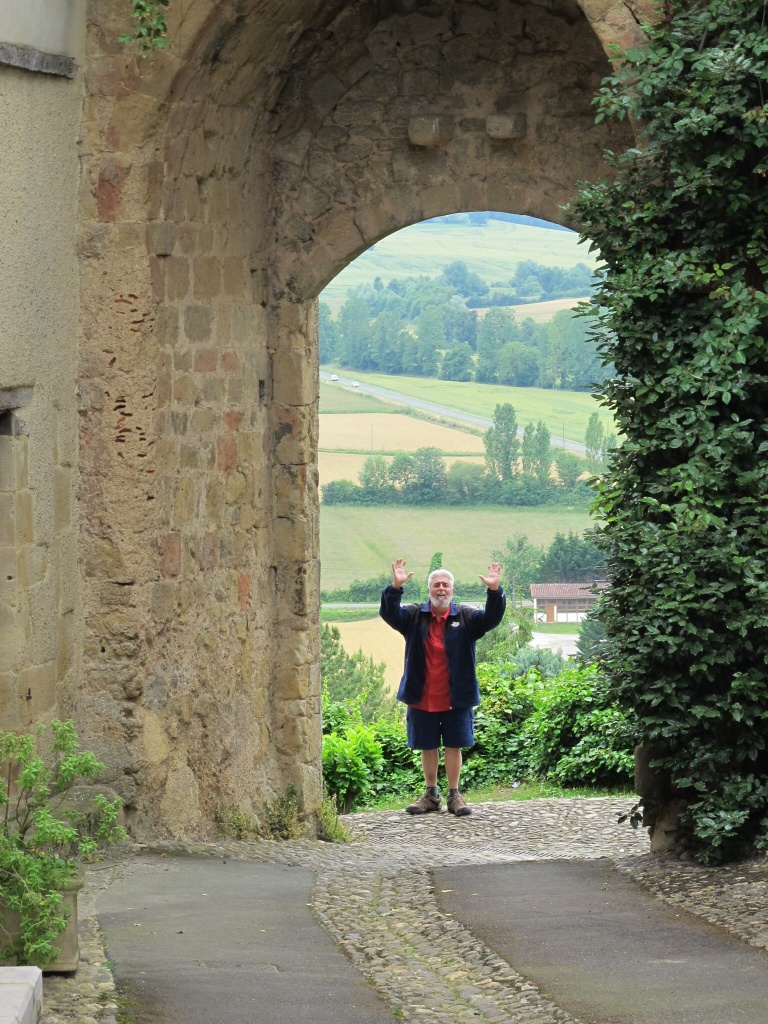 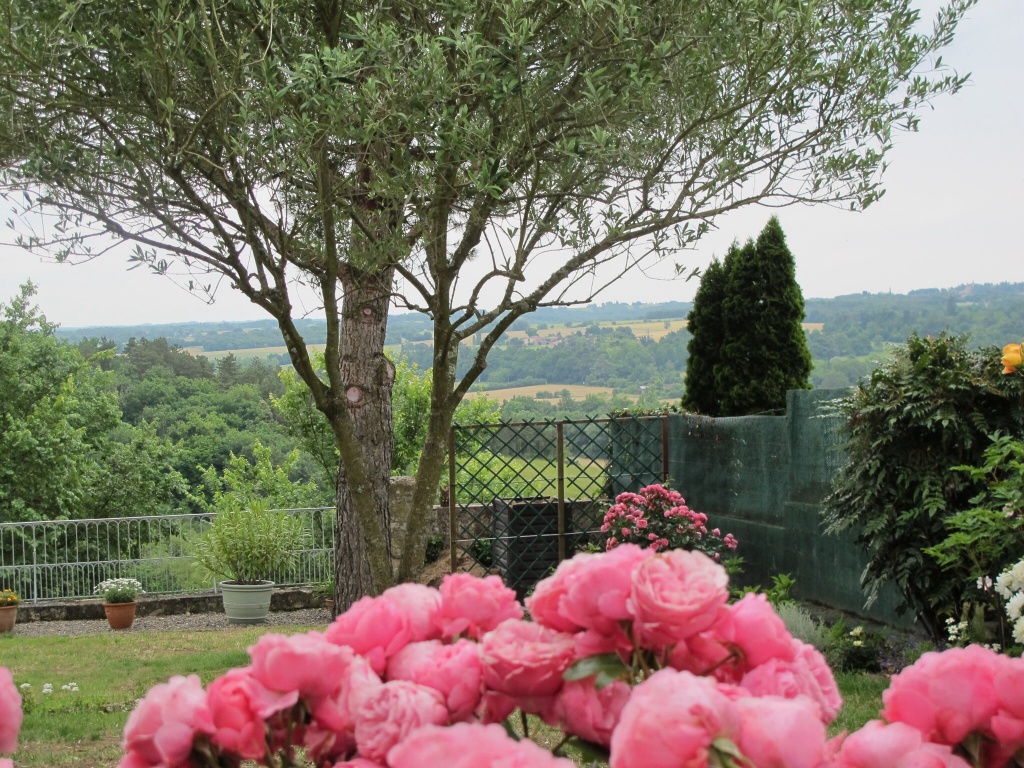 The rest of the walk was very pretty that day and we arrived into Montesquiou (knick named mosquito by MR, Bruce and I). It was a very neat pretty little town with manicured public gardens. We actually chatted to the local post office lady who was weeding and clipping. Bruce was there waiting for us and as we hadn’t had lunch he made us a cuppa and we had our lunch on a lovely picnic table. Then we walked on for 4.5 km to a lovely foie gras farm. Our new friend, the lovely Hugues (Frenchman) was also there. Bruce had popped in earlier and had booked he and MR in for dinner and organised to stay at the farm. These are great days for us as we are out in the country in lovely surroundings and together.

We had a wholesome meal of foie gras, a salad with some sort of offal from the goose, goose with potatoes (I think) a tart and lots of wine and laughing. Probably too much wine! The accommodation was very nice and particularly clean … so after staying at Edna’s I decided to wash everything!

The next morning the owner showed us how they feed the geese.  Now at this point some of you might like to skip a couple of photos and the info.  Basically the geese are out in a paddock for the first five months of their lives and everything is swell.  After that they are put in a barn for a month and force fed corn three times per day.