Beatiful day on the high seas!

One of my main reasons for going to the Grenadines was because I really wanted to visit two places … Tobago Quays, which is a group of uninhabited small islands just of Mayreau and the island of Bequia (next blog). At Union we were very close, so we hired a water taxi for the day and Richard drove us around for the day.

It was a bit rough heading over there … but when he realised that I was scared he scaled the throttle back a bit. It actually only took us about 25 minutes to make it to the quays and our first stop was a bay inhabited by lots of turtles because of the seagrass on the sandy bottom.

So in we went and spent a pleasant 45 minutes swimming with the turtles … gee they can go! I had large flippers on plus my arms going flat out, but their little flippers beat me every time. I did manage to hang in there for a minute or two, but they always got away from me. Even so it was pretty cool swimming alongside them and looking at them in detail.

Then we headed up the hill on the little island that we were on and could see the island where they filmed Pirates of the Caribbean. 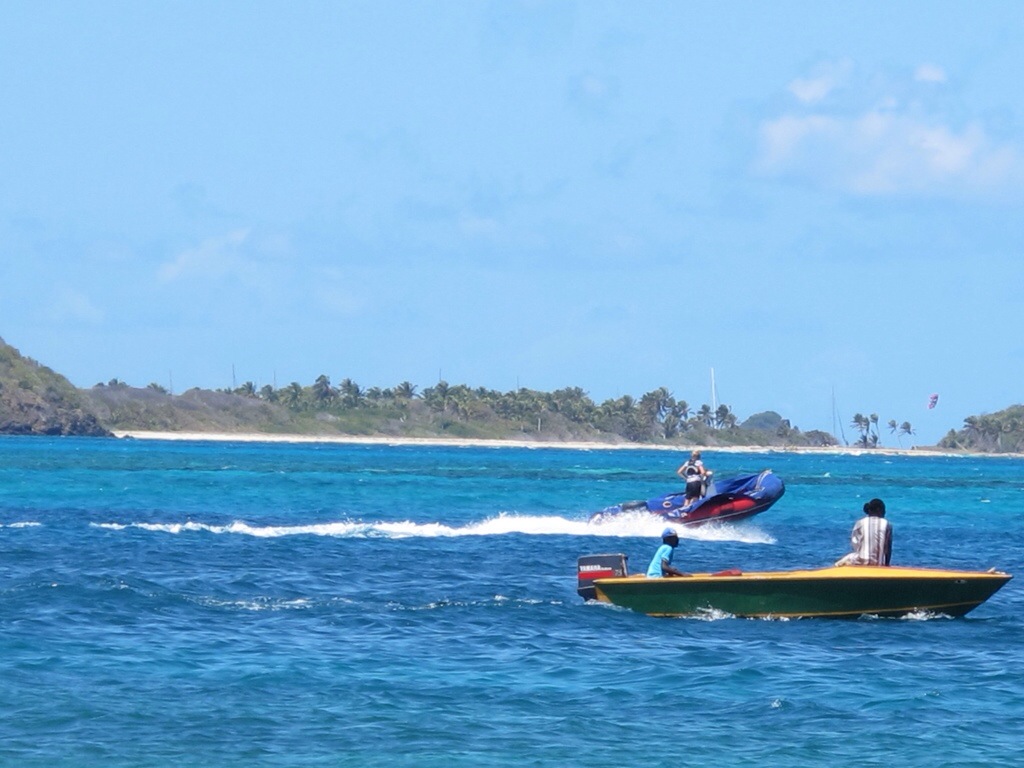 Next stop was a another small island about a 5 minute boat ride away, where once again I snorkelled … John hid under some trees and read.

I love snorkelling … I haven’t seen any great coral here yet but the variety and magnitude of fish is pretty good. Some of the colours of the fish are amazing … others you think … gee, if that was a dress with those colours put together you would say yuk … but place them on stripes on a tropical fish swaying through the water and they look amazing. I particularly love any type of blue fish … especially when their fins flash the different colours through the water.

After my snorkel we walked across to the other side of the island … about 400 metres to where the locals have bbq’s set up for cooking and selling fresh lobster and fish meals. Unfortunately there were three large tall ships that had about 250 passengers each. The boats were beautiful … the painful yankie tours weren’t so pleasant. Nevertheless, it was still magnificent. 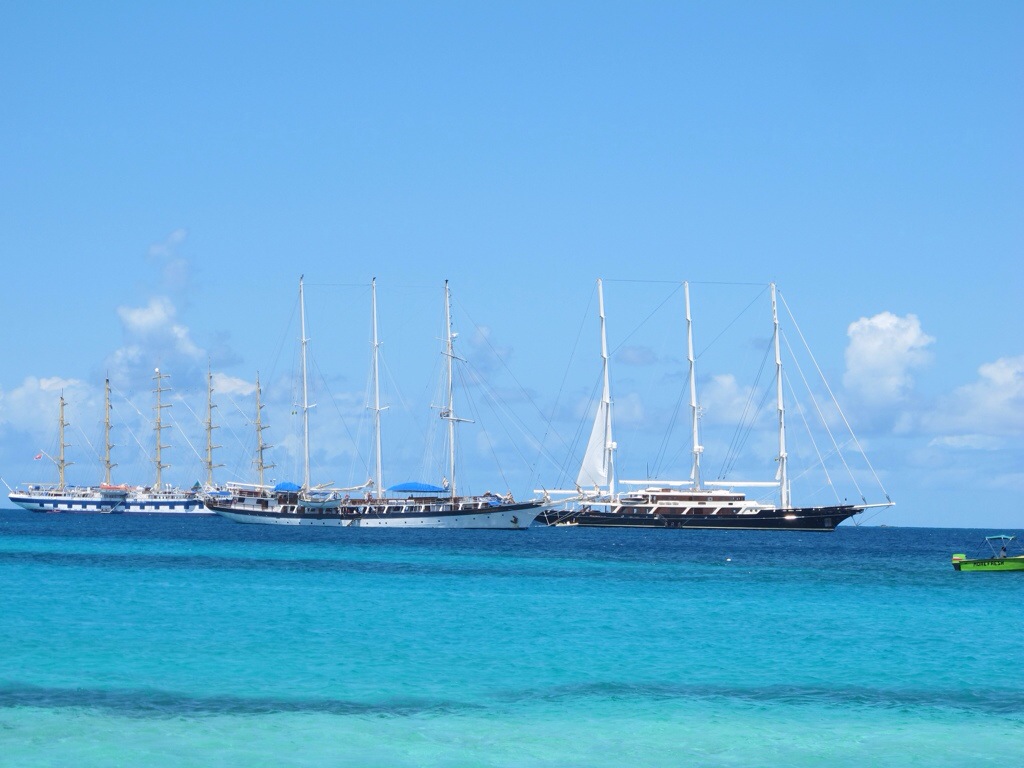 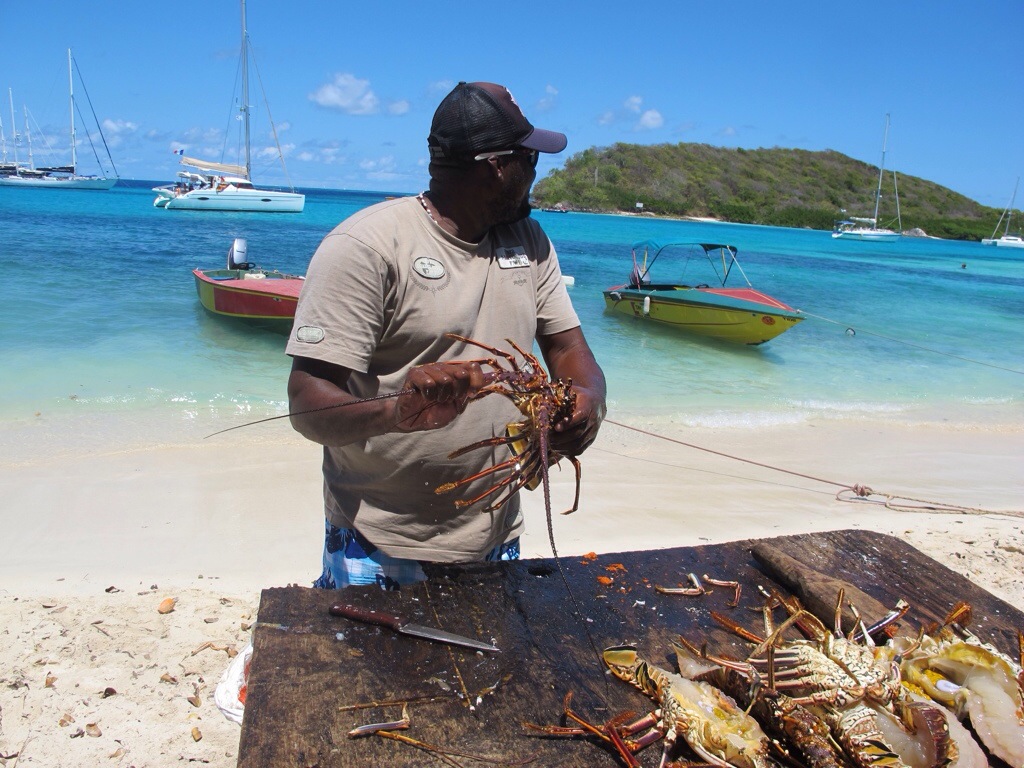 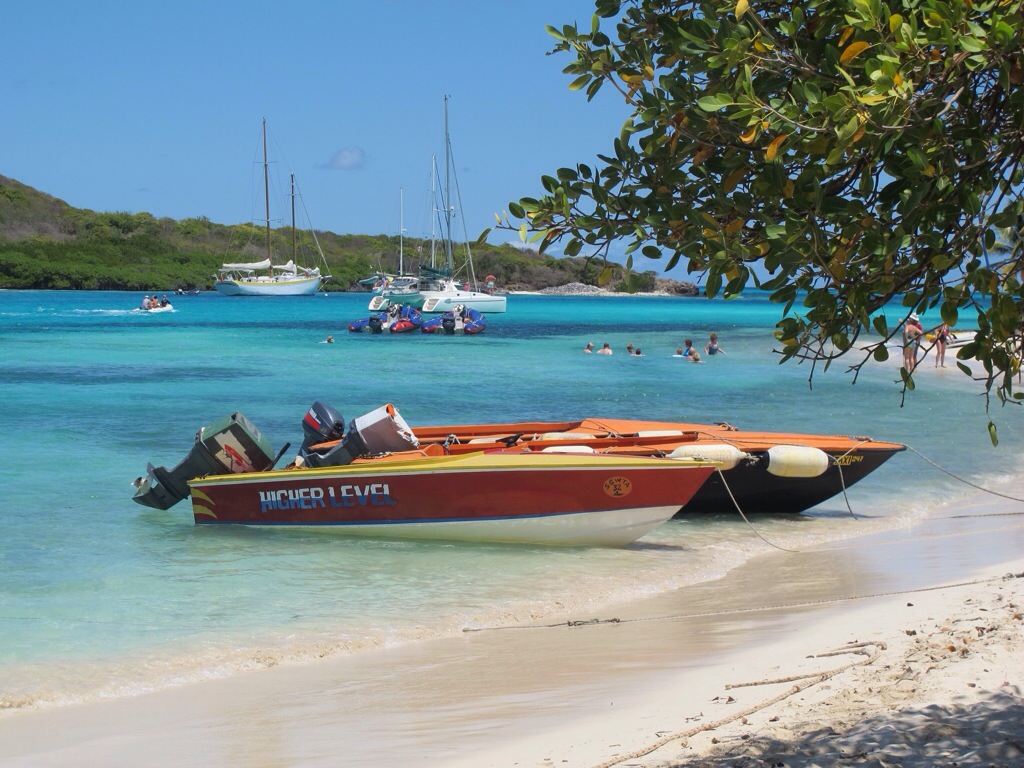 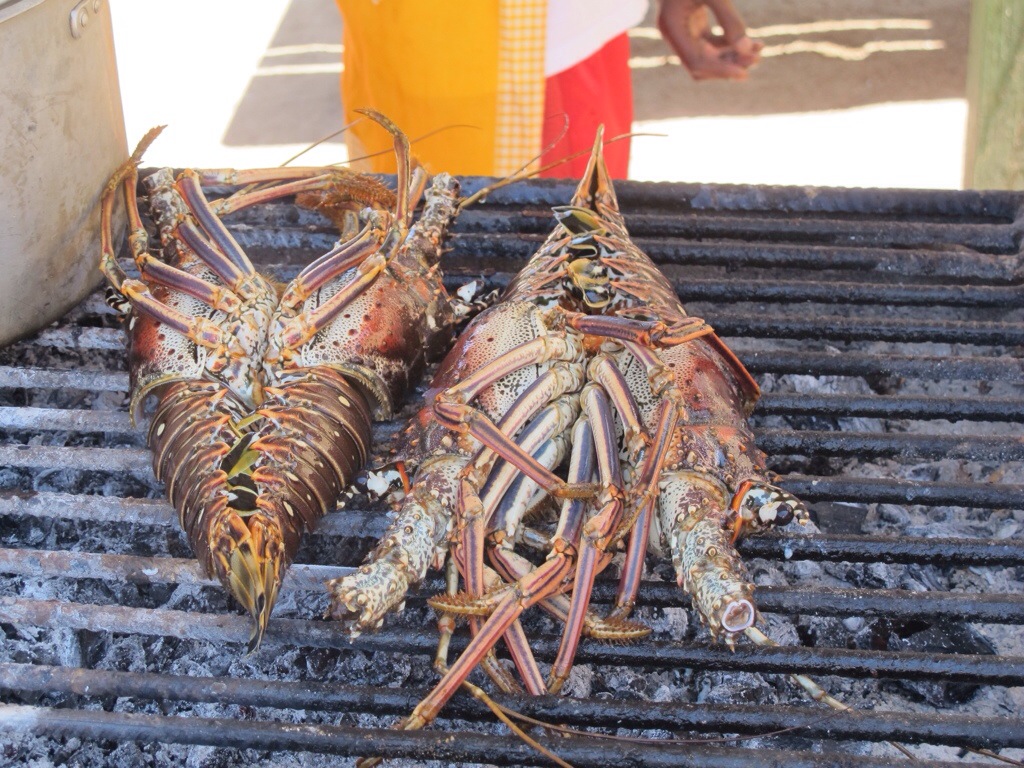 Yes we did indulge in a fabulous plate of extremely fresh lobster … watched the man chopping them up while they were still kicking! They were bbq’ed and smothered in butter and garlic. Fantastic.

There was plenty to look at on this little island … the iguana in the tree above us while we ate, the stingrays swimming in the water waiting to glean the lobster gizzards and the crazy pirate character who ran his own little boat. 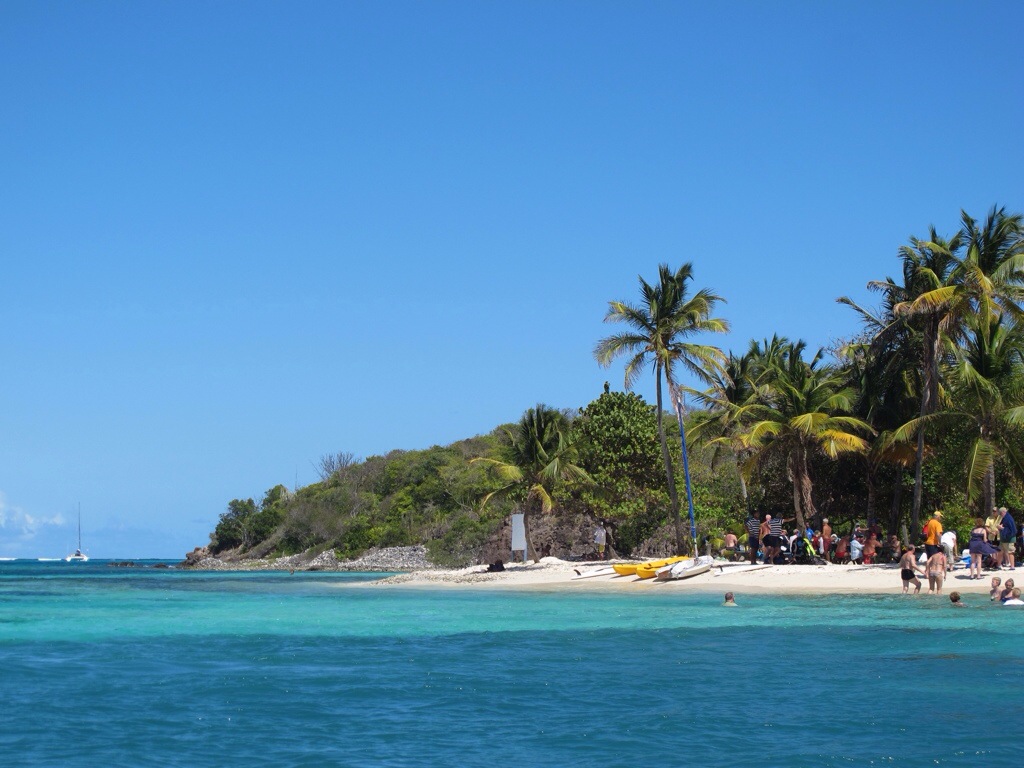 Next stop was Palm Island … which as you can see is stunning. Predominantly a resort where you pay $1200 per night … all inclusive of course! We had another snorkel off the beach before we returned to Union at the end of our day out. 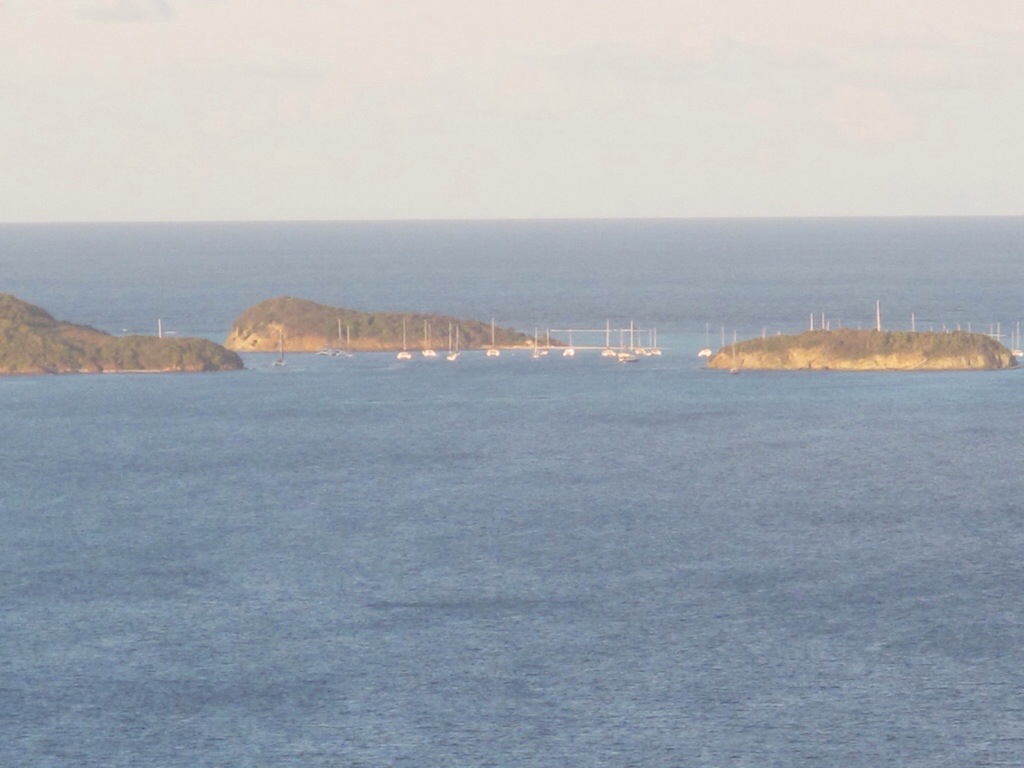 We quickly went home and had a shower and then walked up to the lookout on Union … fairly steep … MR, I am in serious training (sort of!)

John took lots of photos. Back down home again and too exhausted to go out so John cooked an omelette with what little food we had … eggs, potatoes, onion and cheese! Tasted good I was too exhausted to do anything.