We headed off at 8 am on Wednesday morning to try and beat the traffic out of Delhi.  That was reasonably successful … but it was still pretty hectic.  We were pretty gobsmacked by what we saw along the way.  Once out of the teaming city of Delhi it becomes very backward very quickly with cows everywhere … just wondering around.  Hundreds of them … mostly Brahman of course. They have absolutely no fear and are the kings of the country.  They lie in the middle of the road, on the centre strips … everywhere.  They scrummage around and eat out of all of the garbage … which of course is everywhere.  Nobody moves them on… they are sacred and have to be respected  at all times.  Then there are the donkeys wandering around as well … they aren’t sacred but don’t seem to be scared of anything either.  Donkeys are used for transport and they pull a cart .. which can have a whole family or a load of soil or whatever.  The camels are the best … they are everywhere and once again can carry huge loads.  Yesterday I saw a whole family, all of their belongings and a goat.  For me the camels are what really make it exotic.  Then their are the  buffalo which you are allowed to eat and are tied up in the front yard.  Last but not least are the feral dogs.  Haven’t seen any cats yet.

There is activity everywhere … fruit and veg stands everywhere … the men seem to sit around and do nothing … playing cards etc.  Ashok told us that the Women are the workers in Rajastan.  They seem to all be busy wandering around with huge bundles on their heads or carrying big loads … all wearing saris.  Much to my surprise I have found out that married women have to wear their sari over their faces.  Even when they are at home because they go to live with their husbands family and nobody is to see their faces.  Great life!  This is the Hindu women I am talking about … you just don’t see the muslim women at all … they just stay at home completely.  Maybe that isn’t the case everywhere in India but it is the case where we are at present.  I have actually only seen two muslim women in burkas … both times with their husbands.

We had a very long but interesting drive … about 7 hours 225k.

At one stage we saw some women all dressed up with lots of bling and it turned out that they were waiting for a bride to arrive for a wedding.  They saw us taking photos and called us over.  They were lovely and didn’t ask for money … they just wanted to show off their bling and were very excited about the wedding.

We drove and drove … at the end on a one car wide road for about an hour … I must admit that I did wander if Ashok was going to cut our throats and throw us into the dessert … we just seemed to be in the middle of nowhere.

Should have had faith … we arrived at Mandawa … a small town population about 25000.  Pulled up at the very interesting Mandawa Castle Hotel … holy dooley … we had had a huge step down from The Imperial in Delhi.  I don’t know if anyone has seen the movie “The Best Exotic Marigold Hotel” (think that is the name!) well, we had arrived there.  It was a huge old castle but about a quarter of it had been slightly renovated … as it was painted on the outside … but most of it was black and run down.  We stepped inside to find some very interesting antique furniture and of course a very warm welcome.  We had been upgraded to a suite … which of course was on the roof  up a hundred stairs.  Huge room with antique beds … and antique rock hard mattresses. An amazing swing seat which was hanging from the rafters and 15 foot long upholstered window seat with cushions.  All very exotic  .. if a bit tatty.        They say that laughter is the best medicine … well we spent most of the night hysterically laughing.  Dinner was a buffet … which I ate about three teaspoons of and of course a Kingfisher beer which is a lovely beer.

I had great delight watching a bus load of Italians arriving at the hotel … just to see the look on their faces … the very best exotic Mandawa Castle really was very special!

In the afternoon MA and I wandered around the town on our own … trying to dodge cows and bulls.  Of course we were stared at like a freak show … but you get that.  In the early evening Ashok joined us with a young guide to walk around the back streets to look at the old merchant’s havelis, that have now been abandoned but were very ornate and interesting.  Mandawa was on the Silk Road route and the main trade used to be opium, silver and opium. Ashok is a very kind man .. he didn’t need the young guide but he uses him because he said that he needs the money.

We headed off about 9 for a fairly long drive .. about 4 1/2 hours.  Less villages than the day before and reasonable roads … for India!  We arrived at our hotel The Laxmi Niwas Palace which is and old palace of Ganga Singh … who was the hindu king of the Bikaner district.  An amazing place …. stunningly beautiful.  Built around a central courtyard with all of the ground floor rooms used for bars, breakfast rooms etc.  There was one amazing room full of tigers, buffalo etc etc
heads mounted on the walls.

Ashok picked us up and we headed to Junagarh Fort which was the stronghold for the Rathore dynasty.  We had audio guides and wandered around the fort for a couple of hours.  Audio guides were great because we could actually understand 100% of what was being said.

From there we headed back into the country to a temple.  I didn’t take much notice until we were nearly there and Ashok said it was the temple with the rats.  I had read about this and seen pictures and thought that it would be a nice clean temple with the odd rat running around.

As for all temples we had to take our shoes off, but at this place they gave us funny cloth slippers to wear.  I kept my socks on as well … thank god.  As soon as we got near the temple I could smell it … there were rats running around everywhere … there was food on the ground everywhere and the people fed them.  They also had big dishes of milk where they were all drinking from.  Ashok got very excited because we saw a white rat which is apparently very good luck.

I have to tell you that in all of my travels it was the most disgusting thing that I have ever seen.  I was completely disgusted … I am happy to respect other peoples religions but I really can’t see the point in this one.  Apparently they take newly weds to be blessed and new babies to be blessed.  MA wasn’t too phased and madly snapped away but I walked around as quickly as possible and raced out of there.  I felt really sick for a couple of hours afterwards.

Next stop was the camel breeding farm … which was very refreshing after the rats.  Last stop was an art studio in the back streets … you would never find it on your own.  The artist had been published in several books which he showed us and was trying to break the guinness book of records for painting the most leaves on a tree 17590.  He caught his own squirrels and used their tails to make his own very fine brushes.  He has six students studying under him.  It was all very interesting … and of course we bought a couple of small interesting paintings.

This morning when we were leaving the hotel there were about 15 – 20 old cars … some serious antiques, some about 40 – 50 years old … mustangs, mercedes, jaguars etc etc.  I went up and asked what was going on and it was a group of French tourists who had had their cars transported to India … took three months … and they were all travelling together for three weeks driving around India.  Amazing … obviously had a lot of money … there were about five new black four wheel drive lead cars and the traffic was actually stopped as they left the hotel by a policeman.  I would be interested to see how many of them manage to make the trip without having a prang …. non Indians driving in India … very brave!  Whats more … they arrived about 9 pm last night so had to drive in the dark … it is bad enough missing the cows during the day, never mind at night.

Today is a big drive to Jaisalmer where we will be staying for two nights but unfortunately have to stay in two different hotels as it is booked out.

I know that this email is very long … but will try to do a bit each day. 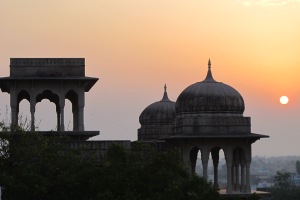 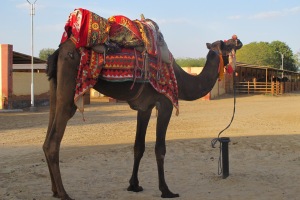