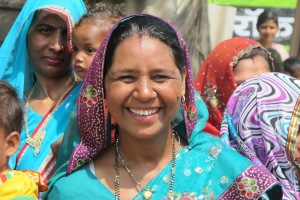 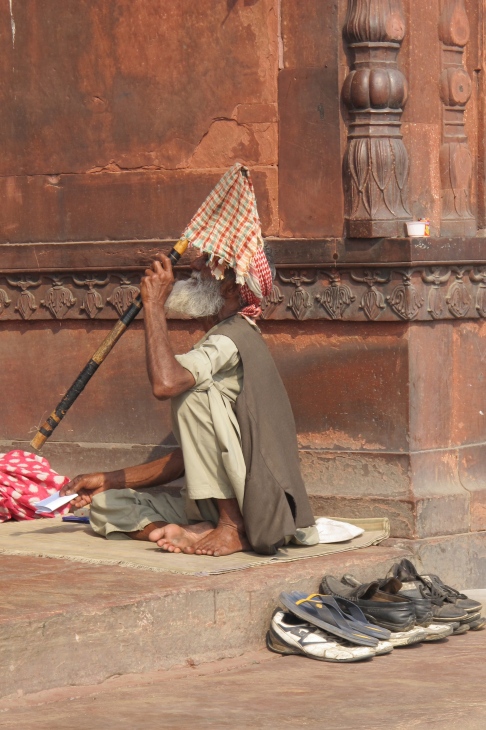 We were up early and headed off at 9 am with Ashok and another tour guide nick named ‘wrinkle’.  Lovely young man who did a BA and then studied tourism.

We did the major attractions … starting with a rickshaw ride through old Delhi.  We had two rickshaws and we each had one of the men with us, which was great because it was pretty scary!  Fortunately because it was so early most of the shops were closed, so we could get through the bazaar reasonably quickly.  I would hate to be in the middle of that when trade is in full swing.  We went to the biggest Mosque in Asia (didn’t actually go inside … don’t think they are fussed on western women), but it was a good view of Old Delhi from up there.

On to the Red Fort.  Along the way a young girl came up to MA and asked to have her photo taken.  Try and remember this is MA’s second day in India.  I was watching from behind and thought to myself, oh this is going to be good.  I knew that she didn’t have any small denomination notes to fling her.  Ashok told MA not to give her anything.  They jumped back in the rickshaw and the girl held on to MA and ran beside her on the rickshaw until she was too exhausted to keep going … then jumped on the back.  Just what the poor driver needed!  When we arrived at the Red Fort … there was a fair argument that ensued, but Ashok managed to get rid of her.  Lesson learnt!!!

We visited the Minaret … which is quite amazing, the Lotus Temple … which was beautiful and resembles the Sydney Opera House and the Humayan (?spelling) Tomb.  That doesn’t sound a lot … but it was a very big day … push push push and unfortunately there was a lot of driving and the traffic is completely crazy.  We had some bad luck and the air conditioning broke!  Nevermind.

We raced back to the hotel by 3 pm to meet up with Lisa Collie a friend we met in Norway.  We walked out to meet her driver and burst out laughing because she has a beautiful brand new top of the range Prada … Ashok has a crappy little thing … sort of looks like an old Cortina … and we bounce along on rock hard seats.  Lisa’s driver was delightful and I found out later that they bought the car when they arrived and have employed their driver.

We headed off to Khan Market for some shopping.  It is where all of the expats go shopping and there are wearable Indian clothes and beautiful homewares.

Then we went to their apartment … which is huge a lovely and met their cook who was really sweet and funny.  We had a lovely relaxed life and learnt about their lifstyle.  Michael gave us several tips … like mutton is really goat and if you see a crowd forming … any crowd … run the other way as fast as you can because Indian’s go nuts when they get in a crowd and it gets ugly very quickly.

Day three we headed off on the road … air conditioning fixed!  Thank god.

Will finish this now and send another email later.