Isle of Mull and the Duart Castle … home of the MacLeans (16 different spellings!)

We had THE most spectacular weather in Scotland.  We both agreed that it was hard to capture how beautiful it was.

After dropping Till off at the airport we headed back up to Loch Lomond and this time stayed right by the Loch … could have thrown a rock from the window straight down into the Loch.  It was lovely waking up in the morning to the sound of the water lapping right next to us.

We had a couple of days up our sleeve before heading to the wedding so we decided to go over to the Isle of Mull.  The drive to Oban was extremely picturesque … particularly Inveraray which we just drove through but would linger longer next time … it is the seat of the Campbell’s and apparently the castle is worth a visit.  I have a tale to tell about the Campbells and MacLeans … catch me over a glass of wine. 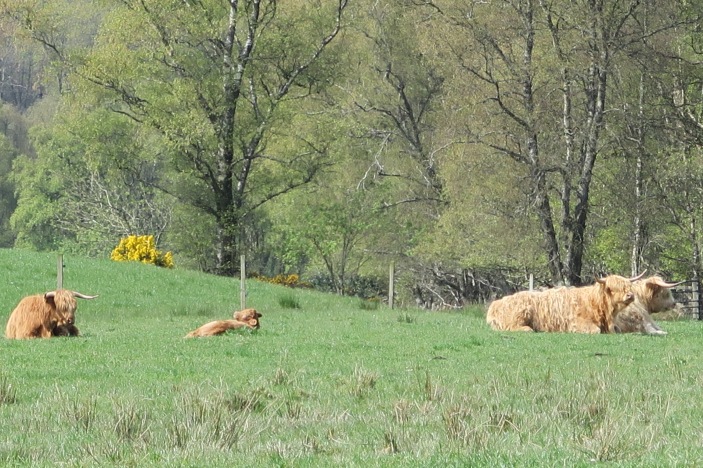 I love!!! The Highland cattle.  I just wish I had of taken more close ups of them. 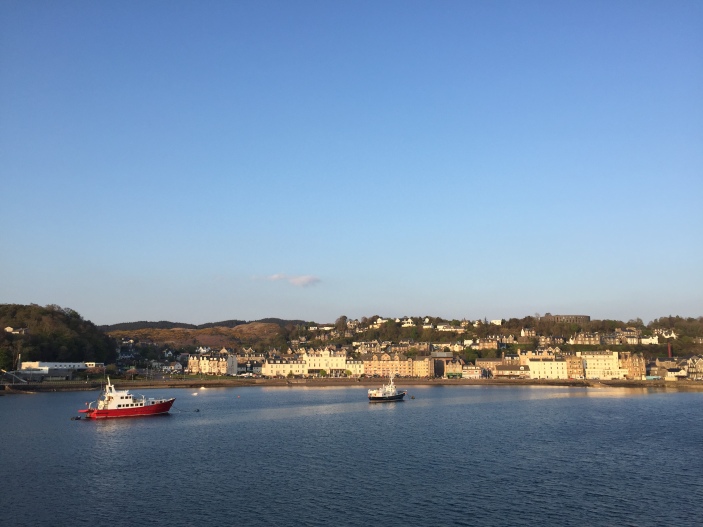 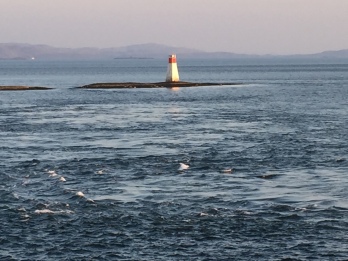 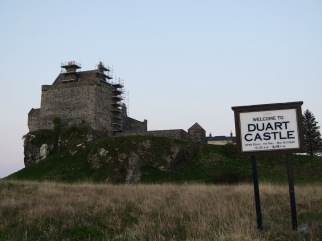 Of course there are thousands of photos so am trying to cram them in.

We caught the ferry from Oban across to the Isle of Mull.  On board John got chatting to a guy (what is new) and he said “I know you”.  As it turned out he was a sailor and John did some official weighing in of boats at a regatta in Lake Garda and John had weighed his boat.

The crossing was less than an hour … the scenery was amazing … however we arrived just on nightfall.  Tried to find the Park4Night but ended up parking in the car park of Duart Castle … the home of the MacLeans.

We woke up the next morning at 8 am to someone knocking on the driver’s door of the van.  John poked his head out of the bedroom window and stuck his hand out and said “Good Morning Sir Lachlan my name is John McLean” Lucky John had done his homework … he is the current head of clan Maclean (as mentioned it can be spelt 16 different ways … so we are definitely in!) and owns the castle.

Sir Lachland said good morning … I was coming to collect 10 pound from you for camping in the car park but I will waver it seeing as you are a McLean. (Definitely John’s ancestor!!!!)  John invited him in for a coffee which he declined … he seemed a bit flustered.  Later on when we were touring the castle we had the photo taken above and he said it will be a long time before he forgets that head popping out of the window of the van!

He kept popping up and chatting to us while we toured the castle … which of course we thoroughly enjoyed.  It lends a whole new meaning when you can relate to the information.

Of course as you can see it isn’t the most attractive castle that I have ever seen but we sort of fell in love with where it was perched … right at the head of the Sound of Mull … and of course the weather was spectacular which helped. 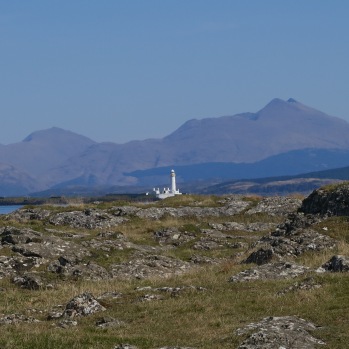 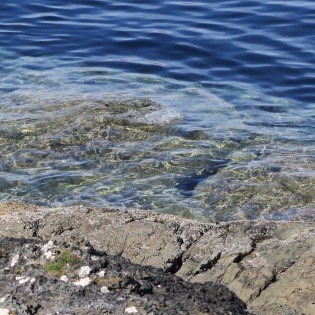 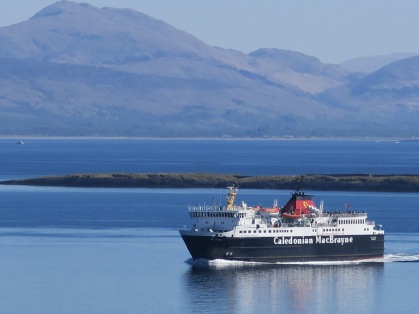 Those bulbs were everywhere … thousands of them all of Mull … the beaches, the paddocks etc.  They are Irises and flower in late May … it would be spectacular to see but we were a month early.

After farewelling Sir Lachlan we headed to the Isle of Iona which is a small very religious island just off Mull … but a two hour drive to get to the ferry to cross over to it … a ten minute trip.  By this stage it was late in the afternoon and we only had an hour on the island as we had to get the last ferry back.  The driving is very slow because it is only one lane wide for 90% of Mull with passing areas every 500 metres. 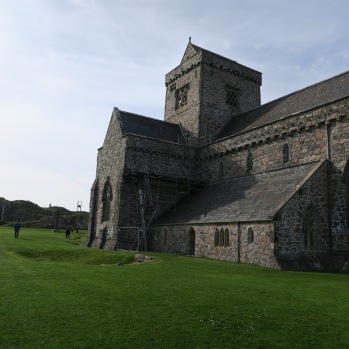 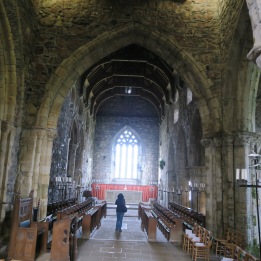 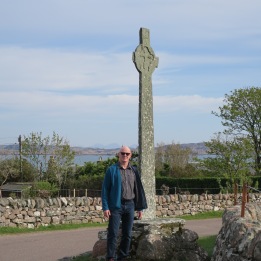 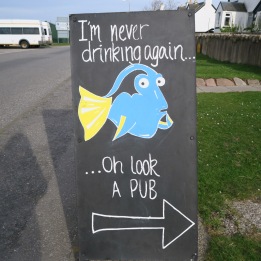 The Abbey on Iona and MacLeans Cross.  The lambs are soooo cute in Scotland.

Isle of Mull … to be continued!