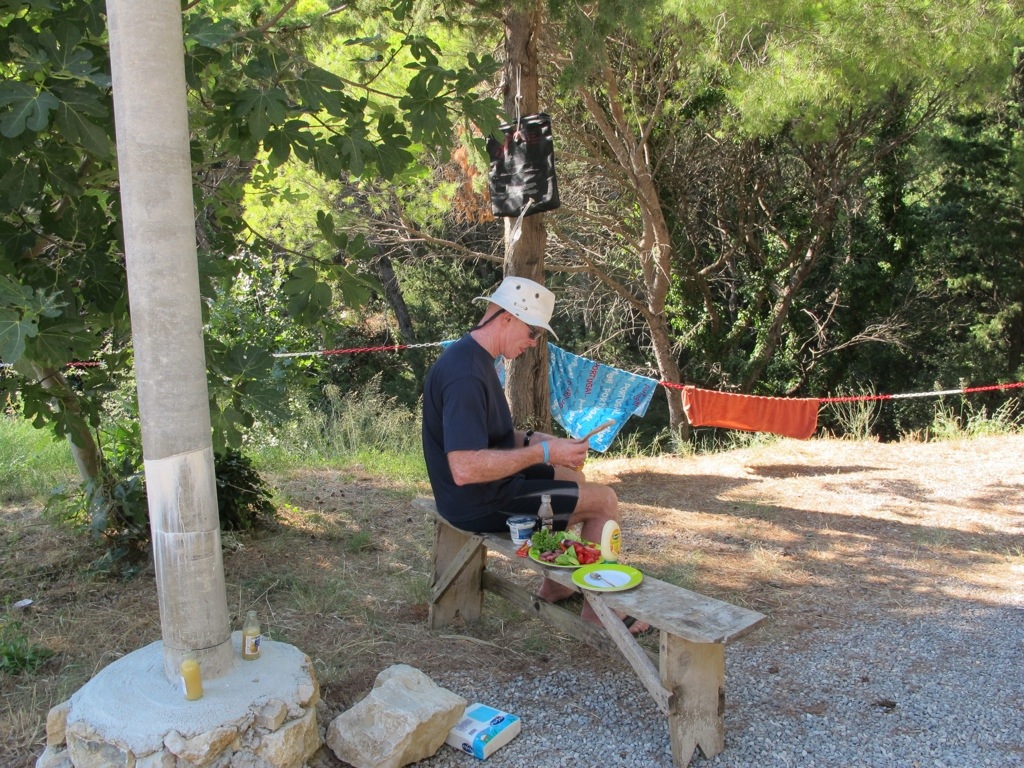 This is a typical lunch for us … loads of salad … today pear juice as a treat. Sitting in the shade and using up whatever amenities we can find … towels hanging on the rope … always searching for shade. The camp shower hanging in a tree … I love it now … it lives on the back near the bikes.

After Makarska we headed south in the direction of Dubrovnik. We stopped in the delta area which is basically the fruit bowl of Croatia. We stopped at this lady’s stand and bought a load of fruit. Note that she has water pumping over the watermelons keeping them cool. John jumped in the river for a swim. Unfortunately for me it was a bit tricky getting in and out.

View from van where we stopped for a snack in the afternoon … not bad!

This is what our fruit bowl looks like today … the figs are to die for … small and sweet. They have just come into season. The other thing we are loving in Croatia is the corn on the cob. I rarely see fresh corn anywhere else in europe.

This is one of our stop overs for a night … great view of some lakes below. Unfortunately, it is really hotting up now …36 degrees, so it is becoming difficult for me to sleep. John goes out like a light … b……….!

A rare photo of me … looking disgustingly brown … I promise I haven’t sunbaked for one second … it is just day to day in the Southern European summer. We have been swimming loads and loads to keep cool. I love the water here.

Yesterday we arrived in Dubrovnik and tried for a park near the old city but just too hard. So we decided to head to the campsite where Pete and Fi had stayed but just parked up in the bus park near it and caught the bus into the old town.

It was stinking hot so we headed straight to the outer walls of the old town and I had a swim off the rocks with the locals. There were kids playing games with a soccer ball. The water was so cool and lovely. John didn’t swim, he minded our gear and read the paper on his ipad … for something different!

After that we went back into the old city and went to a photographic museum of the Bosnian War that Pete and Fi told us about. We also thought that it was very interesting and spent a fare bit of time there … the air conditioning helped.

Then to a cafe for a quick small pizza and coffees before we headed up on to the wall right on 7.30 pm. Last entry is then and the guy tried to talk us out of it but I was determined that I was going up. As it turned out we had plenty of time to wander along and take loads of photos. John is still in Peter Meecham mode so kept himself amused by tipping water on to unsuspecting people enjoying a drink in the bars along the way under the wall.

We left Dubrovnik this morning and are now heading up through Bosnia … Mostar first stop. It will be very interesting to see what it looks like now after the war. The photos yesterday were predominantly of Mostar …. it really was ravaged. The weather is very hot … predicted 41 degrees today … so it will test us. 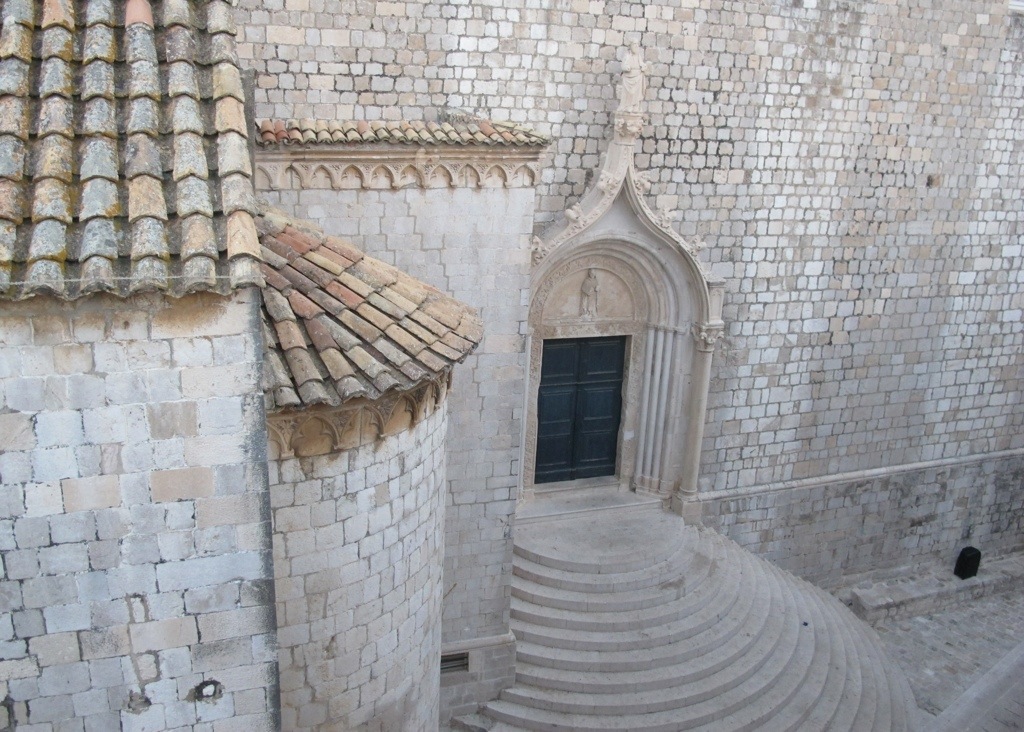 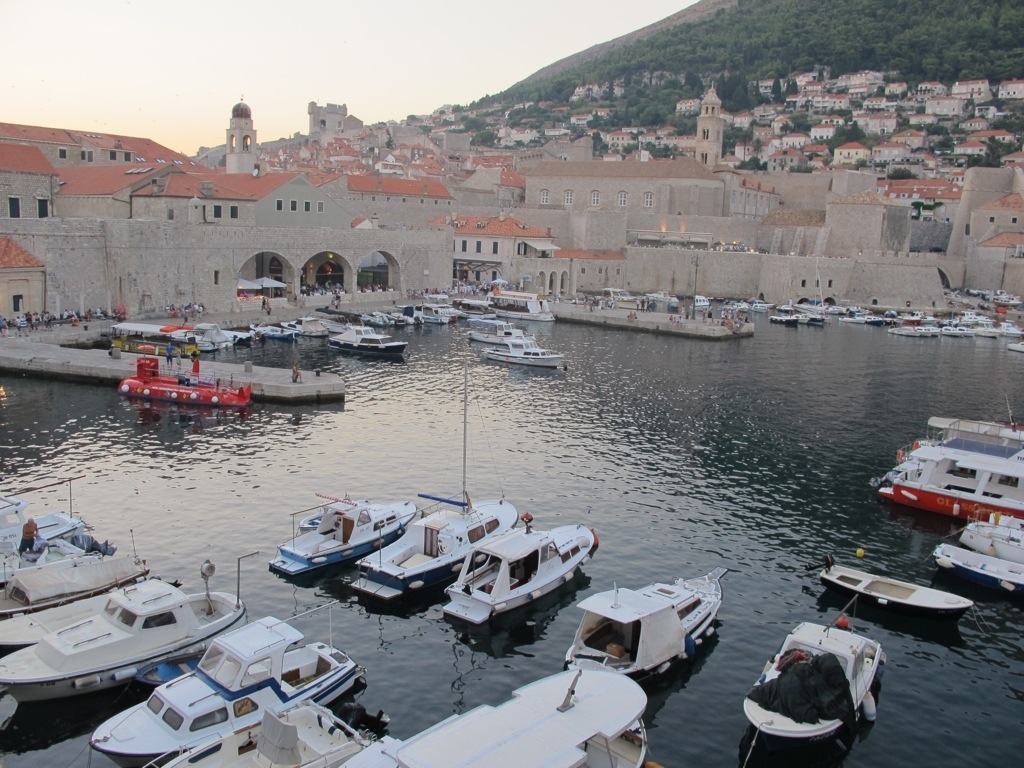 When we got back to the van we had a quick drink at the van with a young German couple that we had met on the bus. Then an Italian guy rocked up with his family in a motorhome. Unfortunately a security guard came and told us to move on …. so we packed up and headed down into the harbour. We were fine there … cool and no hassles.

Currently in a bar in Croatia … toilet stop and internet. I have to tell you that I am so over smoking … they do it everywhere here … in airconditioned bars, restaurants … everywhere!