We headed off reasonably early as we had to be at Susac Island as Seb had organised for the only fulltime inhabitant to cook a whole lamb on the spit for us. It was a lovely cruise into Susac with the lighthouse which was built in 1878 and being 94 metres high our main point of interest. There are usually two lighthouse keepers at a time and they do one month at a time. 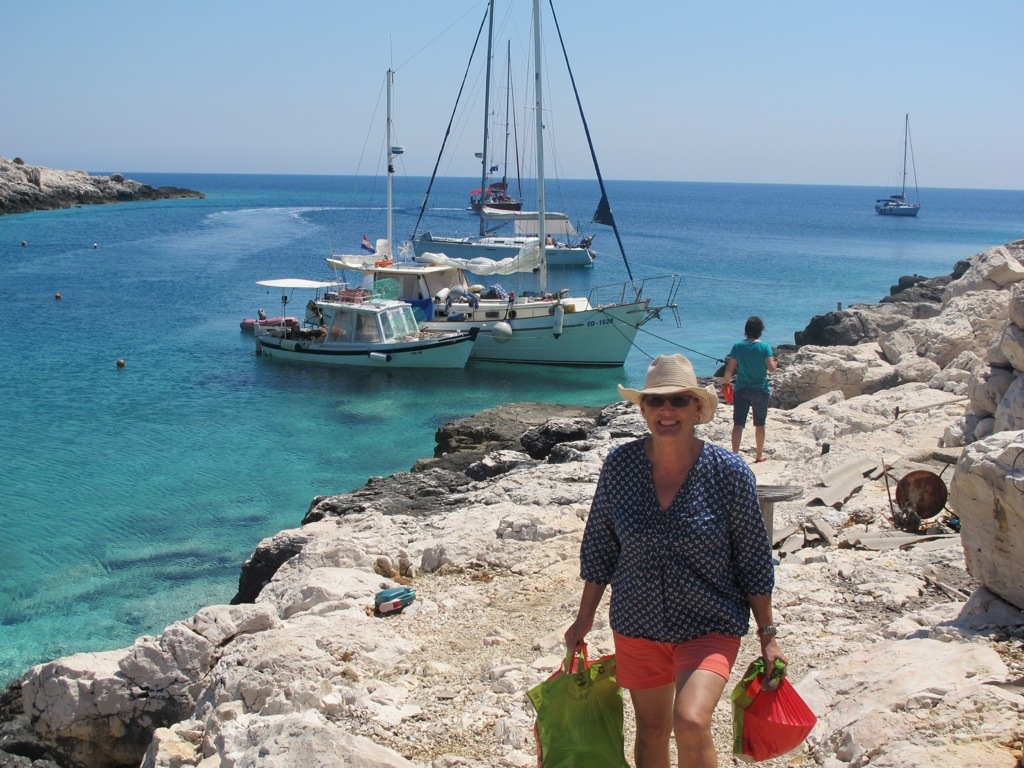 We had a great swim …. all jumping off the side of the boat … of course John and Pete had to do summersaults and make it a competition.
Then we headed up the hill to the shepherd’s hut and had a quick drink before our lunch was ready. Seb had whipped up a cabbage, tomato and caper salad … we are loving the capers here.

It was the most delicious lamb that I have had in my entire life. We all just got stuck into it with out hands. Copious amounts of red wine. We ran out of Gasper’s wine and had to buy some fromthe shepherd. The other thing that we bought from the shepherd was 6 lobsters for lunch today.

When we toddled down the hill we were all ready to put in a big one, but Seb and Gasper were smart enough to initiate a water polo match. Two Slovenians agains 6 Aussies. They won 5 – 4. Lots of laughter and dunking. We had great fun and of course it achieved what they had set out to achieve … stop us from drinking too much. They are very clever.

After the game, we headed off for a two or three hour voyage in the direction of Lastova Island. It was late afternoon and it was absolutely divine. Of course lots more drinks, music and dancing on the back deck. We only had an antipasto platter and small pastries for dinner. Fantastic day all in all. Unfortunately it was very hot last night and apart from John, the rest of the Aussies didn’t manage much sleep. When we are on anchor we can’t have the air con on.

Today we woke up and had a swim before heading in the direction of a little town on Lastova where we quickly dropped Gasper off to get fresh bread and more beer of course. We had breakfast on the move. We are now on anchor off Lastova Island … it is divine. We all had a bit of a nap and a big swim, we are now smelling the lobster being cooked and doing the Sydney Morning Herald quiz.

John decided to have an after lunch lie … in the dirt … with a white shirt on … of course Pete had to harass him and lie on top of him. Fi and I are starting to seriously worry about our husbands!

John jumping in the water on the way back to the beautiful Mon Cheri.

Way too much fun happening here!