Well it certainly has been a huge couple of days. As you know the original plan was to have three or four days with Sonja and Jochen, have a couple of meals, a couple of wines and catch up on their lives. Things changed dramatically when I received that email saying that I had been accepted as a British Citizenship and that I had to complete my citizenship ceremony.

We drove to Dortmund, stayed the night outside our Hymer dealer on Sunday night and first thing Monday morning started negotiating a deal to sell our van and order a new one to be made to our specifications for next year. We had received a quote from a dealer in Munich but really wanted to use our previous dealer as long as the price was right. We negotiated what we actually wanted … which is the same as our current model … sort of … but way better. It is the same size … slightly wider (not much) but on a completely different base … it is Fiat Ducati instead of Ford and a much bigger motor. The new model for next year has lots of improvements plus we added extra things like, a roof rack, better seats, an outside shower, an outside gas fitting for bbqs etc etc.

While I was in the process of doing that John was on the internet trying to do a deal with a guy that he had found on Gumtree to give us a lift back to London from Cologne. I clinched my deal and John clinched his. So the panic started. It was noon and we had until 7 am the next morning to pack up everything out of the van and be back at Dortmund in time to drop the van off and get a taxi to the main station to get a train to Cologne to meet up with a guy that we didn’t know to drive us across five countries and into London!!!!

Daisy and Joe and Peter and Fiona, will know what packing up the van entailed! We have accumulated crap from three and a half years. Travel books, scooters, too many clothes, too many shoes, camping gear, sailing gear and mor sailing gear, everything you could possibly use (including an old cutting board) that you can use to fix a sailing boat. The list goes on and on! There was no time for sorting and throwing, it all just got packed up and stored in either the top of Jochen and Sonja’s garage or their basement. What would we do without those guys??????? 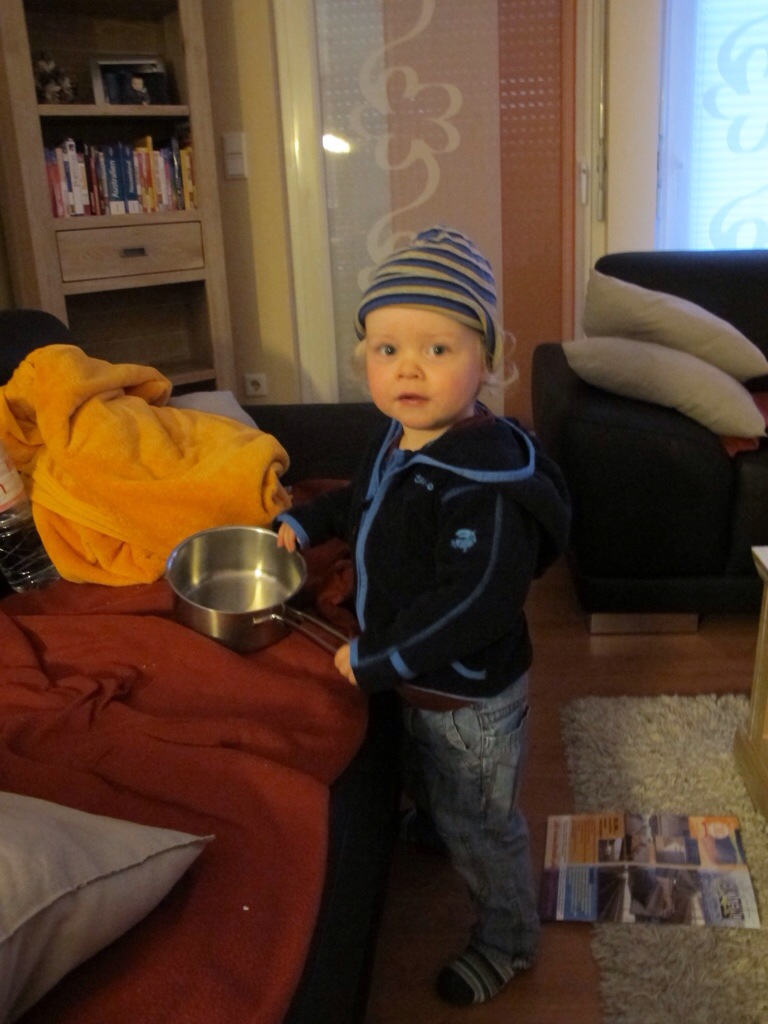 This is Jonathon … isn’t he gorgeous. Unfortunately, I got to have about five minutes with him. Hopefully next year things will be way different. I hadn’t seen Jochen and Sonja at all this year and I only got to see them properly for about an hour over dinner, which I had thrown together in between packing. Nevertheless, it was lovely to see them and they seem very happy. Their garden which Jochen has been working on for a few years now is looking fantastic. He has seeded grass and it is amazing. It looks so good you would think it was artificial … you would never believe that you could grow that from seed. Australian gardeners eat your heart out. I wish I had a photo, but I was just too busy.

So we headed off the next morning early, but not as early as Sonja who drives to Soest station and catches a train at 6 am which takes two and a quarter hours! She is amazing!

We dropped the van off, grabbed a taxi and a caught a train to Cologne. To say I was concerned about this whole deal is an understatement, but I just had to go with the flow. We found Antanais who was lovely. He is a Greek/Bulgarian running a removalist business out of London. He had a Mercedes van with good tyres (the first thing I looked at Till) and he was a good driver. I was exhausted but relaxed right from the start. We stopped lots along the way as we had plenty of time as our train out of Calais to go in the chunnel was for 8 pm.

We had a great trip … along the way organising a private ceremony … the only one left for the week, somewhere to stay … VRBO an little old apartment at Battersea and entertaining our driver.

We can’t believe how it all came together. He dropped us right at our door and a lady was there to let us in at 10 pm. We tried to tip him but he wouldn’t have a bar of it. He gave me a hug … and John too I think! and he was off.

Today I went and picked up my letter from Patricia’s house. Thank god for her as well! Headed to Chelsea Town Hall, which is actually a lovely old building in great condition, and I had my private ceremony at 2 pm.

Michelle, my celebrant was lovely and took us into a very flash room with big bouquets of flowers. It was all very serious. I swore my allegiance to the Queen and was very happy to do so! John took a video and lots of photos. I actually received a big certificate in a frame, which I hadn’t expected. I was pretty chuffed and it was lovely!

We have to race to see a friend in the city … so more tomorrow! (don’t have time to proof read)